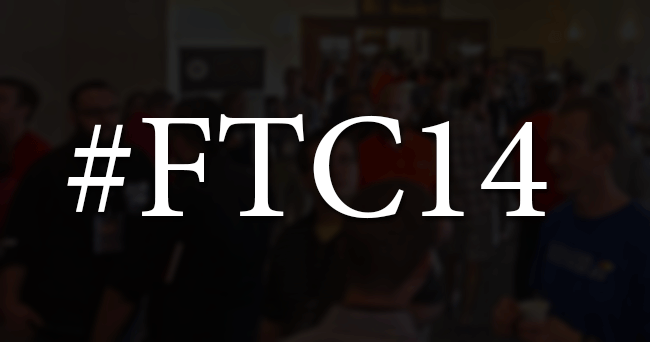 As I walked through the halls of Midwestern Baptist Theological Seminary on Tuesday, I expected to overhear the common church-conference conversations.

“What did you think of Darrin Patrick’s statement on Mark Driscoll?” Of course people are talking about that.

“I don’t know if I agree with Himaya’s stance on discipleship.” Eloquently disagreeing with a speaker is practically a competitive sport at these things.

“So how many people have you baptized this year?” Asked purely to share in another’s joy, I’m sure.

What I didn’t think to expect were all the comments about Midwestern itself. The school’s push to reinvent itself seems to be working.

“I went to the old Midwestern.”

“I love what they’ve done with the logo.”

“This new chapel is amazing.”

Quite a few out there in the twittersphere agree:

#FTC14 was an incredible reminder of why I chose to attend seminary @MBTS. Soli Deo Gloria for this school and its leaders. #ForTheChurch

The SBC’s new president, Ronnie Floyd, was particularly excited about the leadership MBTS President Jason Allen is providing the seminary.

I believe in Jason Allen, and I believe in Midwestern Seminary… I have told people even in the last 24 hours that I believe with all of my heart that Jason Allen is one of the freshest voices in the last decade in the Southern Baptist Convention… Thank you for the team that you are bringing together.

On our way out of the conference, a friend and I were discussing the positivity flowing through the campus. He said something that summed up the situation nicely: “They’ve replanted the seminary.” FTC14 was as much an invitation for church leaders in the region to witness the new MBTS as it was anything else.

The conference itself was very good. The venue was great, the volunteers were helpful and seemed to be having a good time, and the breakout sessions were all tempting (I ended up choosing those led by Jerod Wilson and Rick Holland).

Every one of the main sessions was compelling, even if some convictions on display were rooted more in the personality of the speaker than the Word of God. As one who aspires to be a pastor, checking my readiness against the Word preached and the wisdom of the speakers was a good way to spend a couple of days. The final session with Jerod Wilson was particularly helpful.

Do you feel called to be a Pastor or church leader? Do you know if you are ready? All of the main sessions are now online. They are well worth your time.